Tocatì festival in Verona normally takes place every year at the end of September and I arrived just in time to catch all four days of the festival. In Italian ‘tocca a te’ means ‘your turn’ and is used particularly when playing games with family and friends (you know the kind- Monopoly, Trivial Pursuit etc.) which is why this festival is aptly named ‘Tocatì’ and celebrates traditional games, which are played in the streets of Verona. Some of the games include draughts, chess, backgammon, tug of war, ultimate frisbee, trisella,  table football, boules…the list goes on. The festival is not just for adults though, there are some simpler games for children such as hopscotch, board games, musical chairs and more. The streets are quite literally transformed into one giant playground with certain roads closed for the four days to ensure the safety of everyone. The festival seeks to illustrate that roads and streets are not just places of transit but are also places for meetings and exchanges with others. There was a real sense of community during the festival with all generations and kinds of people taking to the streets of Verona to take part in the festivities. (Some took the games a little more seriously than others- I watched a game of draughts for 5 minutes in which time neither player made a move!) 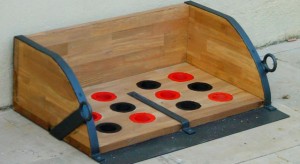 This game is called Trisella. Small wooden balls are thrown into the corresponding coloured holes. 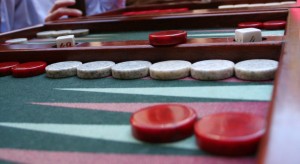 Backgammon- I’ve never really understood the rules of backgammon, so can’t help with this one!

But the festival is not only about games. There are also many food stalls and tents selling food and drink from all around Italy. A great way for everyone to relax after a strenuous day of playing games all day! Below is a one of the very first pictures of me in Verona with some friends on the second day of Tocatì.

In the evening the fun continues with bands and musicians playing all around the city. We stumbled upon two incredible beat boxers and then an amazing tribute band who got everybody up on their feet and dancing in the middle of the street. I really enjoyed Tocatì and it was great timing that the festival began on the day I arrived in Verona, it brought the city to life. Seeing what a sense of togetherness the festival brought about in the people of Verona made it so easy to settle in here. If only we didn’t have such poor weather here in the UK. I don’t imagine it would have the same success as it did in Verona if  we all had to stand outside at the end of September playing games on the street!

Here is a link to this years Tocatì festival if you’re interested in finding out a little bit more about the festival.