Knowing where to start with Spanish festivals is far from easy. There are festivals here for everything and varied doesn’t quite cover it. I have been to 3 major festivals in Spain this year and this doesn’t include the days when the city was inexplicably overrun by people in fancy dress.
The first festival I went to was el carnaval del toro in Ciudad Rodrigo. Ciudad Rodrigo is just an hour or so from Salamanca and is known for its bull festival. I am not a fan of bull fighting and personally see bull running as plain idiocy, so perhaps this wasn’t an ideal destination for me. The day I was there three men were injured, one very seriously. Although I can understand that historically these were in some ways a necessary part of Spanish culture, nowadays they seem to be festivals for tourists.
Aside from the very questionable ethics of bull fighting the atmosphere at this festival was still pretty incredible. A lot of the people in town, including myself, were not there for the bull fighting or running. They were there for a party and to show off some of the most creative fancy dress costumes I’ve ever seen.

Prizes go to: spaghetti and meatballs, lego men, snails and beer bottles.  I went as a giraffe in a tutu. I had seriously underestimated the scale of Spanish fancy dress.

The slow realisation that I was taking a photo.

The next festival on my list is Semana Santa. Again dressing up was involved (this time not me) albeit on a far more religious scale. This is because Semana Santa is the week leading up to Easter Sunday. It involves religious processions through the town or city centre and takes place all around Spain. Each church has its own procession and each of these processions has at least two large floats (pasos); one of Jesus on the cross and one of the Virgin Mary in mourning. Some of these floats, which are created by artists, are hundreds of years old and are displayed within their “home” church in the lead up to their procession. 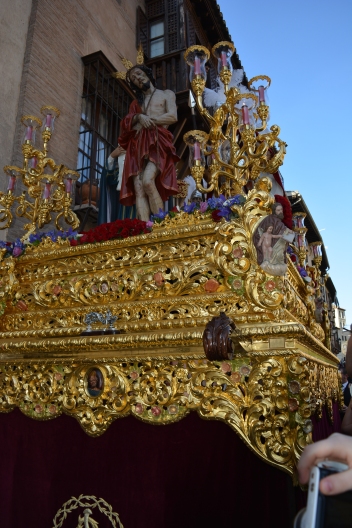 The processions are a pretty odd sight to see, particularly at night when it all starts to seem slightly ominous (take a look at the costumes and you’ll soon realise why). The robes worn are penitential robes or nazarenos and those walking are penitents. Some walk barefoot, with shackles, or even carry a wooden cross, although in most cases they simply have a candle. 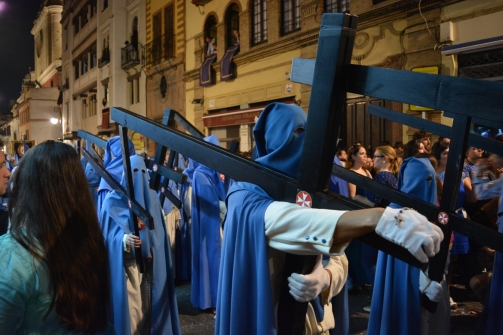 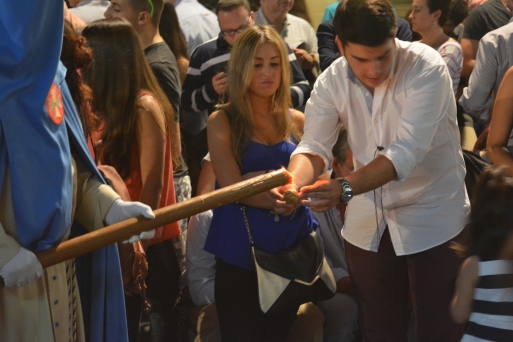 Some children walk through the processions collecting as much candle wax as they can to make a ball of wax.

Being such a historical town, Salamanca has one of the oldest Semana Santa celebrations in Spain, with processions traced back to the 13th century. Salamanca is also original in that it follows up Semana Santa with Lunes de Agua – the final major festival I attended.
Lunes de Agua also has religious links. It dates back to the 16th century when Prince Felipe II decided that that during Lent and Semana Santa it was important that Salamanca set a good moral example. To do so, all the prostitutes were sent from the city to live on the other side of the river under the watchful eye of a priest. Lunes de Agua is the day that the people of Salamanca traditionally welcomed the prostitutes back into the city. How moral. Nowadays the festival is celebrated with a picnic (and alcohol) down at the riverbank.