I arrived at my friend’s apartment to find a group of 30 – 40 people sat cross legged on the floor, on couches and on pillows in their living room. A guy stood up in front of them, holding an accordion and whispering soft lyrics to his pleased crowd. Fairy lights lightened the room and the silence from the crowd was itself magical. I awkwardly stepped over body parts, jackets and bags and found a spot on the wooden floor. I then began to listen.

“I will be dancing in my grave,

I’ve got a soul that can’t be saved

Saint Peter stop me at the gates –

I’ve got a soul that can’t be saved.”

I looked around the room at everyone. Their eyes were fixated on the music, and smiles graced their faces. There was slight movement in the far corner as people made cups of tea, but the soft tones of Bashu’s voice and his accordian soothed us.

Bashu and his accordian. Have a look at his soundcloud! https://soundcloud.com/bashu/cant-be-saved

Montreal is known for its music. Leonard Cohen‘s lyrics are pursed on everyone’s lips, written on coffee shop menus or even inscipted into my professors emails: ‘There is a crack in everything. That’s how the light gets in.’ Montreal’s plateau, a beautiful, picturesque area of the city, depicts the artistic scene.

Stairwells leading up apartment blocks with ivy twisting around them, bicyles clamped next to streetlights and leaves scattering Montreal sums up the realness in mont-real – as clichéd as that sounds. 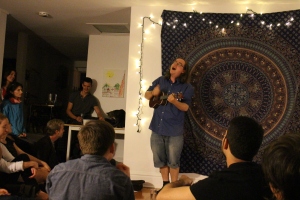 Richard Garvey, a lovely guy from Ontatio. He came back to Montreal a few days afterwards and we all sat in a park together and played music.