Its been two weeks since I arrived in DC and it still hasn’t settled in that I live here yet. I can already hear myself becoming more american (the amount of times i’ve described things as super this week is obscene). The first week of my time here was intense to say the least, orientation in the USA is about as far from Edinburgh freshers as it gets, instead of drinking every night I had days jam packed with ice breakers. Even still, life on the hilltop has been pretty amazing so far and I can’t wait to see what adventures the rest of the year holds.

Before I get onto the more serious part of my post, just a few observations I’ve made of America:

Georgetown is an amazing part of DC, it’s an incredibly wealthy neighbourhood and full of shops, restaurants and bars. I feel so lucky to be living here as an exchange student, as at an average of $3 million a townhouse it’s safe to say it is unlikely I’ll be buying property here any time soon! John Kerry lives a couple of streets away and has a secret service car parked outside his house 24/7, when walking around I feel like I’m on the set of House of Cards. 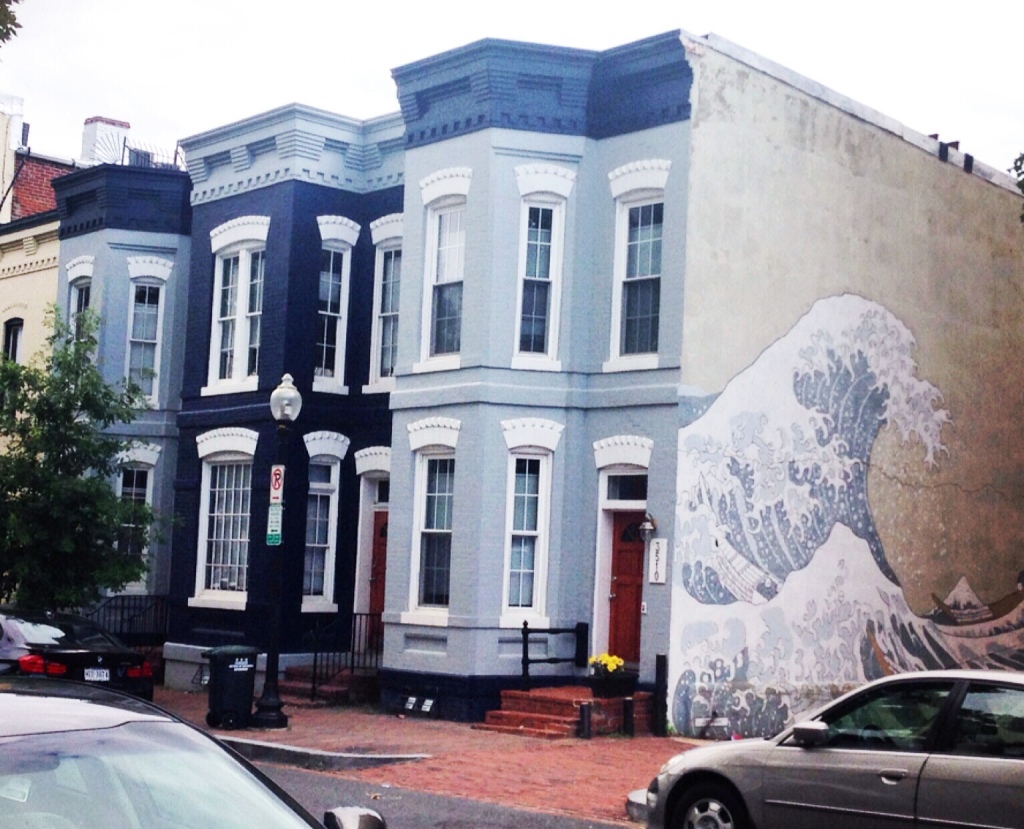 Georgetown students really get into the spirit of things, these houses are painted the school colours

However, not all of DC is as privileged as Georgetown. Yesterday I took part in the university’s Community Service Day, which works with communities each year in the Ward 7 area of DC. Ward 7 is one of the poorest areas in the city, and represented a stark contrast with the more affluent areas I’ve been experiencing for the past two weeks. When you cross the Anacostia river into Ward 7, the median income falls to over three times less than the other side, and teen pregnancy rates become ten times higher.

However, part of Ward 7 I found the most shocking was their classification as a food desert. It’s extremely hard to get hold of fresh fruit and vegetables, as there is only one supermarket servicing the whole ward with over 70,000 people living there. This means children brought up in the ward have a diet that mainly consists of processed and packaged foods, as most of the population cannot access the Safeway and there is no where else to get fresh produce, with not a single restaurant in the whole ward. I found it so shocking that in a country as developed as the US, there were people unable to access fresh food,  when just over the river there were endless supermarkets – something we definitely take for granted.

75 of us went to volunteer – building a community garden in a neighbourhood called Fairfax Village. The site of the garden was previously a tennis and basketball court that was used as a tool for engaging families and children in sport. However, over time it became run down and soon became an area where people would go to drink and do drugs and was therefore shut down. The plants took over the courts with trees growing through the concrete and it eventually became a wasteland.

However, now residents of Ward 7 are working to transform the site into a community garden where they can grow fresh produce and provide for the neighbourhood. It was extremely tiring work (as soon as I got home I fell asleep for 3 hours) – I’m not used to doing hours of manual labour in 34 degree heat!  We built walls for the garden out of the old tennis court surface and I was impressed with my wall building abilities even if i do say so myself!

I’m smiling yet hiding the pain of 15 mosquito bites

Nevertheless it was so rewarding seeing how far we came in just one day – though there is still a lot of work left to do on the garden before there’ll be any vegetables growing. It felt so much more personal putting time and effort into creating something for the community rather than just donating money to charity, you could really see the difference it would make to the people living there. It was great to meet the local residents who were so welcoming and grateful for any help they could get in transforming the neighbourhood, they had an extremely positive and hopeful view that things in Ward 7 were changing for the better. Volunteering in Ward 7 really made me want to get involved with more projects in DC, and I’m already looking for what to do next!